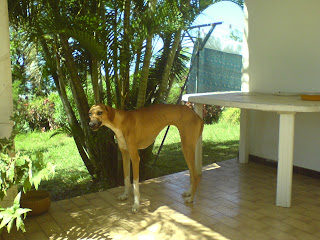 ...is the littermate and full sister of Batna. Bennan still lives with her breeder Brigitte Washington on Reunion Island. Bennan is a word in Tamazight, the language of the Amazigh (unfortunately still referred to as "Berbers" by most of the world), with means something like "of course". Batna was named for the village in Algeria where Brigitte was born.

Tamasheq, the language spoken in the Sahel by the culture of the Kel Tamasheq (which means simply "people who speak Tamasheq") is basically the same language as Tamazight. Really they are like language brother and sister. The Tamasheq (who are in reality an ethnicity of the Kel Tamasheq...albeit the dominant ethnicity within that region until recently) living in the Sahel and Sahara today are the descendants of North Africa Amazigh that moved into the central and southern Sahara and eventually further south into the Sahel around a thousand years ago.
Posted by azawakh place at Friday, August 29, 2008