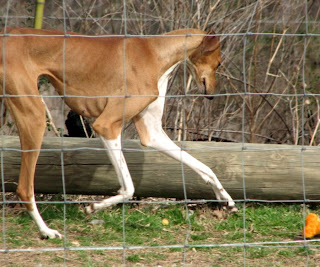 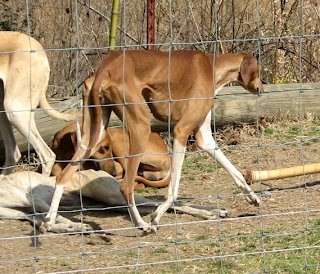 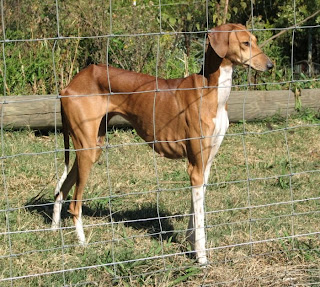 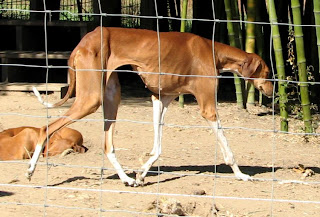 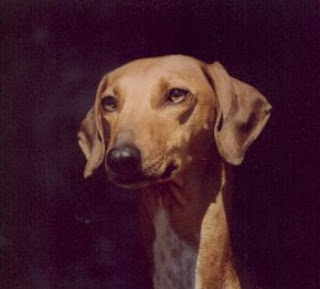 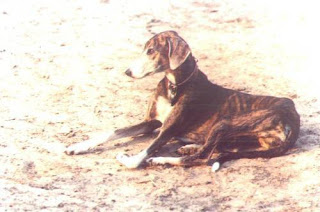 ...whelped two female and five male puppies last night, al hamdullilah. Afsoon lives with Doug Koger in Miami, Florida, along with Sheshonq (sire of the litter, Sheshonq is sired by Fasiqqi and is out of Chenna {X Jana}]), Masi (another taidit who is due to whelp any moment, Insh'Allah), and two Barzaya. I am excited and of course very happy for Doug and most of all grateful that Afsoon (Kaisoon X Iman [maternal half-siblings]) is healthy and that her puppies are healthy, al hamdullilah, and that finally my hope (and Doug's promise!~) that Afsoon and Sheshonq would be mated has come to fruition, al hamdullilah.

Afsoon was seriously injured not long before the move from Georgia to New Mexico. She impaled herself on the sharp end of a cattle panel and in trying to escape carved a hole deep into her lung. Luckily she is tough and healed without problem, al hamdullilah.

This mating is a strong line-breeding to Jana and is what the bedu horse breeders would describe as being "pure in the strain", since both dam lines are Lara, the beautiful Sahelian bitch who founded the "Yugoslavian line" together with her brother Gao and the outcross Darkoye Sidi, al hamdullilah. There is also a less intense line-breeding to Hatshepsut, my first Sahelian-bred taidit, daughter of the legendary Taikoussou. The number of "New African" idi in the ancestry is interesting and important: Atri ag Mansoufouga, Agarouf, Anubi ak Tin Akoff, Babasch, Ejeker, and the taidit Tekewelt (and Hatshepsut). And interesting for me is that Innana (through Kabara, dam of Fasiqqi), is in the ancestry. Innana was the sister/littermate of my foundation male Isesi.

I place great importance on dam lines. And the Lara dam line was predominant in my breeding program until the fire. But in losing Iman, Chenna, Showq, and Tittawen, I lost four taidit carrying this dam line...Semteende being the only other taidit with this dam line (here...there are others placed with other people...but who knows if they will ever be bred? [actually Alison Tyler reminded me that she has daughters of Imood (Kusaylah X Iman)] Insh'Allah). One of Afsoon's daughters will come to me, Insh'Allah, and then there will be Semteende, her daughters Tadamakat and Tarakimt by Azenzer (Fasiqqi X Iman) from her first litter, and Mouna (X Aslam) from her second and most recent litter, and Afsoon's daughter here to carry this line forward in my breeding program, Insh'Allah.

Doug will keep one daughter; I will take one daughter and at least one son. So there may be male haanshee k'nai available. Please contact Doug personally for further information: domiko@mac.com

The bottom two photos are of Jana and Hatshepsut.

Click here to view the ancestry of the litter.
Posted by azawakh place at Wednesday, August 06, 2008

Oh, I remember Afsoon! Such a funny dog, always wanting to be with the people, and noisily letting everyone know how unhappy she was to be separated. Her babies are beautiful, and I am sure will share her sweet temperament.