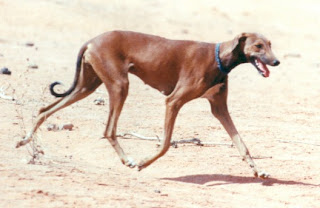 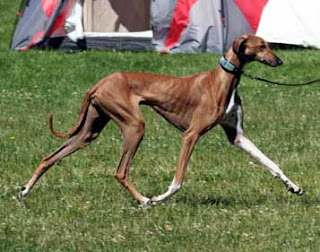 ...if it isn't already! that I, Daoud Abdullah Adbullah, am a preservationist breeder; my primary goal in breeding Azawakh is to preserve, to the best of my abilities, and with the limited resources available to me (I am not in the Sahel!), authentic Sahelian-type Azawakh. I use the term "Sahelian-type" since dogs bred outside the Sahel cannot be Sahelian. The best I can hope to do is to approximate this type which so appeals to me. I am not alone in this mission...there are several breeders outside Africa working (seemingly against all odds at times) to preserve the archetypal Azawakh. However, at the same time there are also breeders working diligently towards an opposing goal: the transformation of the archetypal Azawakh (in all their diversity!) into Azawakh as "winning show specimens of a homogenous phenotype".

Over time, these two types (archetypal and show) have become so markedly different that people who breed or own Sahelian-type Azawakh have become less and less inclined to take their dogs to shows (even just to show them to people as examples of the race); perhaps like me they find the show ring environment artificial and divisive? Maybe they just assume that the newer generation of judges (who see basically only the show dog type) will not like their Azawakh? I can't know for sure but am relatively sure the motivations are myriad. In any case the result is that many people new to Azawakh see only dogs bred/designed to win in shows. Or if and when people see both types they usually see only one type winning in the show ring. There are simply too few judges remaining who remember the dogs from earlier times (and even if they do maybe some of them see the show specimens as an "improvement" upon the archetype)...and these judges are often berated for putting up dogs who are not typical!~ "Typical" as in "hyper-stylized" versions of Azawakh.

One basic question: why is the show ring the place for Azawakh to "prove" their worth? There are no show rings in the Sahel. Not to say the peoples of the Sahel do not appreciate a superior specimen. But they have different criteria. And what for one person makes a dog superior might be quite different from that of another person.

For me the two images within this post illustrate unambiguously the differences in the two seemingly similar yet distinctly opposing types. I don't doubt that many people would find the European-bred Azawakh to be quite beautiful. But for me beauty cannot be divorced from authenticity. In examining the image (the second) of the European-bred Azawakh I imagine how she might be bred...and hope it is in a way that will mitigate the genetic/phenotypic breeding tendencies away from the source: the Sahel. When I look at the image of the trotting pregnant/lactating Sahelian Azawakh (the uppermost image) I have the feeling al hamdullilah!, Thanks to God, that such a creature exists/existed; that I am able to see this image at all.

The great Chinese philosopher Lao Tzu wrote: The Tao is in returning. "Returning", for me as a breeder, and in a practical sense, means widening/stretching the genetic base of my breeding lines through the periodic introduction of Sahelian-bred stock.

It is understandable that some people think the New African Azawakh are different from the ten dogs used to found the French and Yugoslavian lines, since those dogs are no longer with us.  And the few images that exist are often hard to find and mostly what people see are the hyper-stylized dogs of the show ring. But the original ten were the same type Azawakh being brought out of Africa today; some of a more elegant type, some of a more rustic type. But all genetic/phenotypic options must be available to us as breeders if we are to preserve the Azawakh.

Lao Tzu also wrote (and this simple message is one of the philosophic cornerstones of my breeding program): Keep honing and sharpening a knife and the edge cannot be preserved for long.

Continued, unrelenting line-breeding to ONLY a few select dogs is the death-knell for the Azawakh in the west. Breeders! Let us have the courage, the patience and the foresight to incorporate "New African" blood into our lines. The benefits may take generations to become obvious...but the Azawakh will in the end be the better for it, Insh'Allah. Surely the long-term needs of the Azawakh as a race outweigh the immediate desires of our eyes!
Posted by azawakh place at Saturday, August 09, 2008