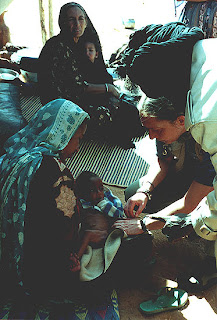 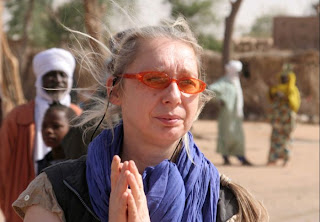 ...it is hard for me to talk about my personal feelings for the people closest to me. But people should know about Christian (Ag Amaiass Azawakh). She is known as the "medicine woman" of ABIS...no matter where we went (and on many previous expeditions to the Sahel) Christiane used her knowledge of medicine and the supplies she had brought with her to aid whomever needed her help. If the nomads told of a little girl who was sick in a far-away camp, Christiane was there to help. If the people needed aspirin to help relieve the fevers they suffer during malarial attacks, she gave them aspirin...her focus hardly ever shifted from this mission to provide whatever aid she could to those in need. You can read an article about this aspect of her relationship to the idi here.

Also as personal friends we had many wonderful experiences. It was funny, on the expedition we hardly spoke a word to each other. But no words were necessary. It is this kind of friendship. Just a glance, a smile to show we saw and understood the situations we faced.

I must tell a funny story though: The first time Christiane came to my house in Georgia, when Gabi was living there, I spoke only French with Christiane (her now I know married name is Thiere-Rostaing!), thinking she was French. She always nodded as if she undstood but spoke hardly a word. After a week she finally admitted that she did not speak French! That she was German. She had been wondering why I was speaking French to her....we got a great laugh out of this...and on the expedition I CONTINUED to speak to her only in French!!!! It had become some kind of "tik". Well, we understood each other, regardless of what language was used.
Posted by azawakh place at Tuesday, August 12, 2008

Trips means to learn life
Tuareg Poem
Thanks for the nice words about me!
Yours Chrissi