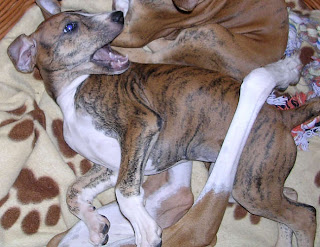 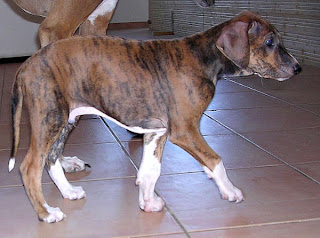 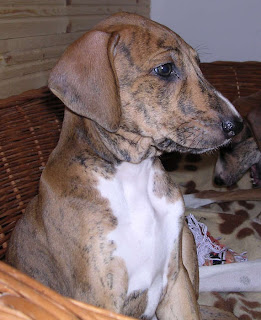 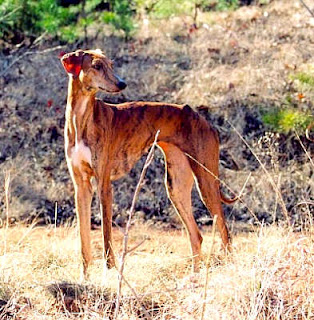 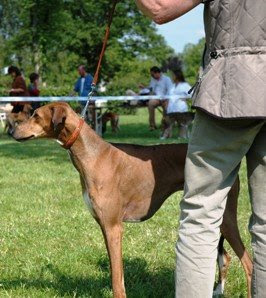 ...Tombouktou's Azawakh, and I are closely "related"; not just through our great friendship but also through our dogs. The dam of my foundation taidit was owned by Gabriele (Gabi as she is known to her friends): Al Hara's Jaba, a taidit of the Yugoslavian strain. Gabi chose Ahod (he was thirteen at the time!), son of Targui (Targui was imported into France and is one of the seven aidi used to found the "French" line), a Sahelian idi, as the sire for her first litter. The litter was bred at Ingrid Aigeldinger's in Switzerland and carries Ms. Aigeldinger's Al-Hara's prefix.

Gabi kept Jaba's daughter Tobol; her sister Tarada was chosen by German-born artist (and my friend I hope I can say, may she rest in peace, Insh'Allah) Gisela Cook-Schmidt (Reckendahl's Azawakh) to be sent to a breeder here in the states. Luckily for me! al hamdullilah, this breeder was not impressed (this breeder found Tarada's front legs imperfect...) by little Tarada and refused to accept her. While in "holding pattern" at another breeder's house, waiting to be returned to Ms. Aigeldinger in Switzerland, Tarada and I discovered each other.

I fell in love with her at first sight...I had never seen anything so beautiful...and she apparently took an immediate liking to me because she followed me around the breeder's place, keeping a respectful distance, the first day, and that first night slept at the bottom of the bed provided for me. The request went out to Ms. Aigeldinger that Tarada be allowed to go home with me (I had already one idi: Reckendahl's Isesi (bred by Gisela Cook-Schmidt), and the rest is as they say "my own little perhaps insignificant in the big scheme of things but nonetheless important to me history".

Tarada, bred to Isesi (whom I called Siqqi), whelped one litter at the age of four, al hamdullilah: four sons and one daughter, al hamdullilah (more on the story of this litter later...). When her litter was three months old Tarada was hit by a car and after a week of trying to keep her alive at the University of Georgia, one of the best veterinarian schools in the states, I decided to let her go, mash'Allah. Tarada's daughter Jana produced two litters for me; one sired by Kel Tarbanassen Firhoun and one sired by Safouan Al-Ifriqiya (Atri ak Mansoufouga X Hatshepsut (X Taikoussou), al hamdullilah.

Gabi now has in her breeding program the genetic material from both these litters. She has three daughters of Kusaylah Al-Ifriqiya (Firhoun X Jana) and now (through her most recent litter) the blood of Safouan through his son Alem'nemehal, sire of Amadahl (X Taytok, Gabi's Sahelian-bred taidit), al hamdullilah. So life has come full circle.

I hope they will develop into strong and beautiful aidi n'ailulli (Tamasheq for "the noble dogs of the nomads"), Insh'Allah.
Posted by azawakh place at Thursday, August 07, 2008

My very first dog was named Suzy
I never knew her breed, but looking through you beautiful pictures of dogs, I'm pretty much sure she was close to that Breed, very tall, always very elegant, never panting & cool.
I was very upset one day when I came back from school and my mother told me they took her to "a farm" were she could run more freely... Toke years to understand what they really mean with "farm".