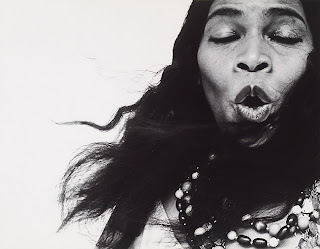 He wrote: by waiting for the moment when Anderson closed her eyes, I was able to suggest her intense inner concentration on the song and to focus only on her mouth. Even if people know nothing about Marian Anderson, one can still see in this photograph that she was the very embodiment of human song/voice. And if in fact the viewer is aware of the social context of the photograph—that Anderson fought in a very quiet and effective way to be heard in the 1930s, despite attempts by the Daughters of the American Revolution to prevent her from singing at Washington D.C.'s DAR-owned Constitution Hall because of her race (which caused then First Lady Eleanor Roosevelt to resign from the organization) one would be able to detect a kind of moral probity and strength in this portrait as well.

It is one of my favorite images that I have ever seen. I feel I can see a human soul in the photograph.
Posted by azawakh place at Tuesday, August 26, 2008

Oh, thank you for this posting this. What you wrote truly captured her soul. Another shared favorite?