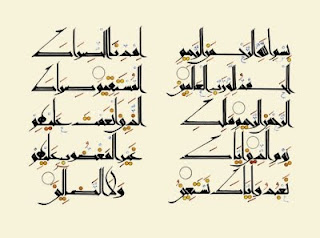 ...(in the kufic script) from the Holy Qur'an. Al Fatihah translates roughly as 'The Opening" or "The Prologue". It is the first sura of the Qur'an.

Kufic is the oldest calligraphic form of the various Arabic scripts and consists of a modified form of the old Nabataean script. Its name is derived from the city of Kufa, Iraq. although it was known in Mesopotamia at least a 100 years before the foundation of Kufa. At the time of the emergence of Islam, this type of script was already in use in various parts of the Arabian Peninsula. It was in this script that the first copies of the Qur'an were written. (from Wiki-pedia)

It is my favorite form of the Arabic calligraphic scripts.
Posted by azawakh place at Thursday, May 13, 2010