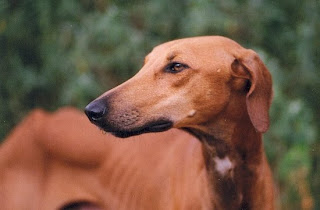 ...is the sire of Tadawelt Idiiyat-es-Sahel's puppies. The litter was bred by Marya Morales, her first of what I hope will be many, Insh'Allah. I was proud when I read the comment thread on Facebook regarding Tadawelt and the puppies, but disturbed to see no mention of the sire of the puppies. Sorry folks, but the puppies were not the result of an immaculate conception!

Maybe its just a 'male' thing, but I think it is correct that the sire be given his 'props': Alatokh was mated to Tadawelt after repeated attempts to mate her to Marya's first two choices (Kidal and Ailal [Alatokh's full brother]) proved unsuccessful. Maybe it was a 'third time's a charm' thing. From my perspective as a Muslim....mash'Allah wa al hamdullilah wa Allahu ul-Akbar.

The mating is interesting for me on a personal level because it represents a strong blending of three (out of five) of my dominant dam lines: Taytok, Lara, and Hatshepsut, as well as a balanced blending of New African/ABIS stock* with the 'Yugoslavian' and 'Old French' foundation lines. That the puppies are 'typical' for their race reinforces two strongly held beliefs: a. that the crossing of individual specimens (typically outbreeding) must be balanced by the crossing of distinct 'lines' (typically linebreeding or inbreeding), and b. my belief (in relation to the original Sahelian bred imports to Europe) in both the value and necessity of the perennial infusion of New African bloodstock into the foundation European bloodlines.