Boum and his dam Taikoussou... 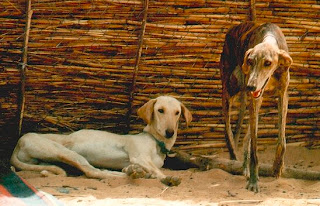 One of the primary dam lines of my breeding program is from Taikoussou (bred by Ayad ag Inachanan, Tin Akoff, Burkina Faso, the Sahel). Taikoussou (herself the result of a full brother to full sister mating) was bred to her full brother to produce the litter from which Boum was selected to breed back to his dam. From the resulting litter Azabor was bred back to his gran-dam to produce the litter from which Monika Kessler (Azawakh Kel Dahoussahaq, Switzerland) selected the tiny hanshee k'nai she brought back to me; a gift from Ayad. Al hamdullilah.

I love this photo (courtesy of ABIS) of Taikoussou and her son Boum. Boum and Taikoussou are featured in the chapter about Azawakh in the book Dog's Best Friend: Journey to the Roots of an Ancient Partnership, and as well are featured in a television series produced in tandem with the book (for German television): Abenteuer Hund.

Boum died at a very young age from distemper not long after the filming of the episode. Mash'Allah wa al hamdullilah.

I now have another descendant of Taikoussou--Tamahan--whom I brought back from the 2007 ABIS Expedition, a second precious gift from my now dear friend Ayad. He was the only son born to the last daughter produced by Taikoussou. Al hamdullilah. So his unique genetics (more on this later....a new sire and dam line from his sire) will be added to my program, Insh'Allah.

Noowirah is now pregnant by Tamahan and is due around the 18th of February 2009, Insh'Allah wa al hamdullilah.
Posted by azawakh place at Sunday, February 08, 2009