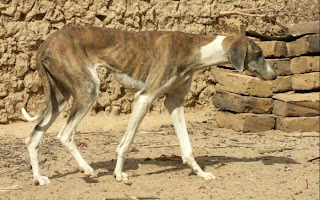 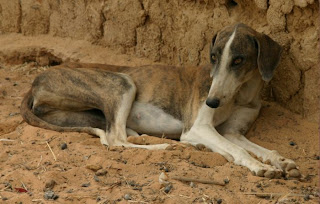 ...of the dam of Tamahan, another male I brought back from the Sahel. Tamahan was bred by my friend Ayad ag Inachanan, who was also the breeder of my first Sahelian-bred taidit Hatshepsut. The taidit in the photo was the last daughter of Taikoussou (dam of Hatshepsut) and Tamahan was the only puppy born in the litter she whelped four months prior to our arrival in Tin Akoff. Here is a photo of Tamahan's paternal grand-dam.

Ayad had saved this puppy especially for me and considered him very special (as do I...but then I consider them all, all of them to be special in some way, al hamdullilah). He called him "Jacques". But I cannot have an Azawakh with a French name...so I changed it first to Al Khanous and later settled on Tamahan. More about Tamahan later....and I must look for his photos. The top photo was taken by Corine Lundqvist and the one below by Christiane Thiere-Rostaing.
Posted by azawakh place at Thursday, August 07, 2008