I never heard anyone say her name... 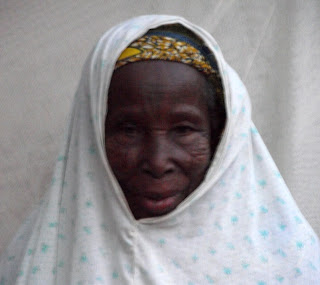 Like everyone else, I called her Grandmother. She is the undisputed matriarch of the village of Kanazi. She is also the oldest person in the village. Though her exact age is unknown, it is accepted that she is well into her nineties.

She and the other elderly women of the village whispered Fajr, Zukhr and Asr alone in their homes, but they were always present for Maghreb and Isha, the evening prayers performed just outside the village's small, mud mosque. Cloaked in black, on mats placed to the side and slightly distanced from the men and boys, they prayed. Their modest, disciplined devotion heightened the spirituality of two of the five daily prayers that are a binding duty for all Muslims.

The younger women and girls respectfully stood, kneeled, sat and prostrated themselves in rows just behind them.

It took a village to convince her to pose for this portrait. The sun had set and the resulting image is grainy and unfocused.